Siberian Ginseng is a thin thorny shrub that grows about 15 feet tall, indigenous to China, Korea, Japan, and Siberia. Not to be confused with its cousins, Korean Ginseng (Panex Ginseng) or American Ginseng (Panax quinquefolius) 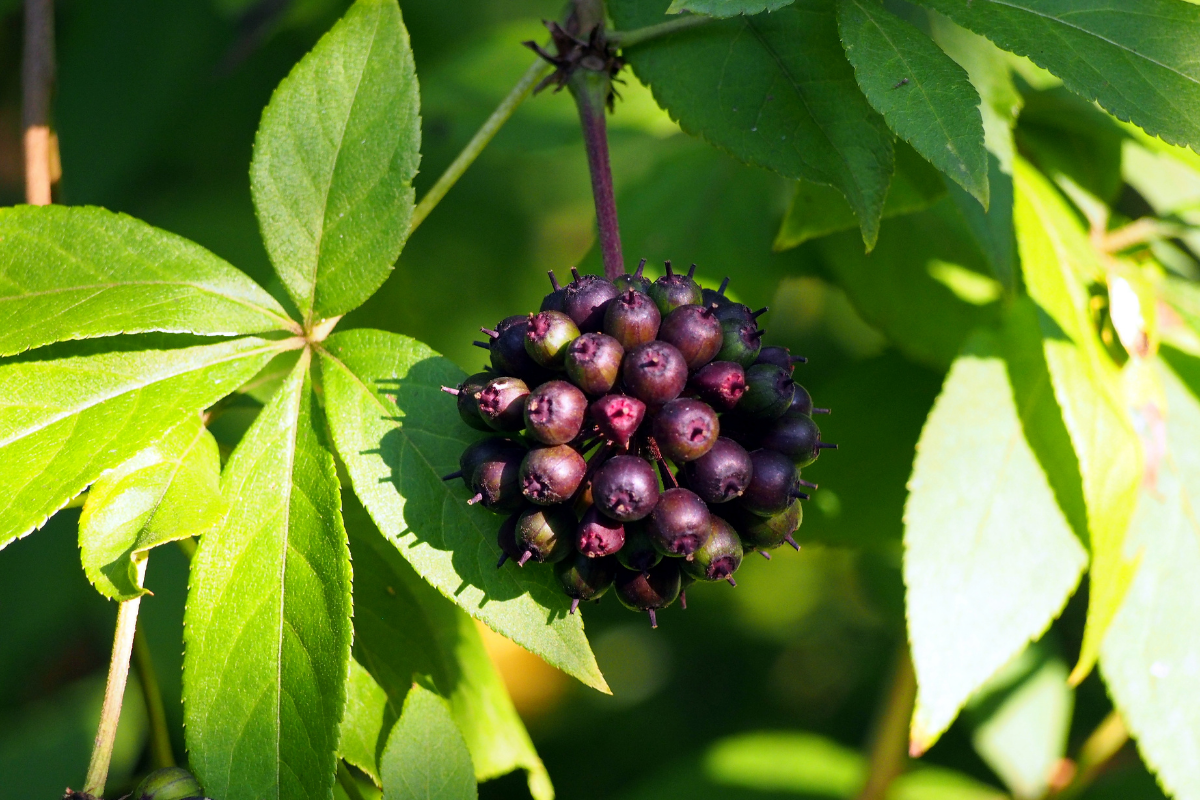 WHAT IS AN ADAPTOGEN?

Siberian Ginseng is an adaptogen. If you haven’t heard the term adaptogen you are in for a treat, because adaptogens are gaining traction and their value is becoming recognized. You are on the cutting edge! Adaptogens are natural substances that help the body adapt to stress and achieve balance or homeostasis. In other words, in stressful situations adaptogens help us function at our best. For an herb to be classified as an adaptogen, it must be shown to help the body adapt to stress, improve balance and overall immune function, be non-toxic, and cause minimal side effects.

Siberian Ginseng has been used for thousands of years in China, known to promote energy, vitality and longevity as well as being an effective treatment against respiratory and other infections. A Russian study of over 13,000 auto workers showed that participants who took Siberian ginseng over the course of one winter developed 40% less respiratory infections.

Chinese healers used Eleuthero Ginseng to reinforce the bodies vital energy otherwise known as Qi. It wasn’t until the 1940s that Russia embraced the herb as a result of the work of the Russian physician named Brekhman. Brekhman boosed its popularity with his unparalleled authority in adaptogens. As Siberian Ginseng gained traction it became the focus of many studies. In a series of Russian studies during the 1960s over 2,000 healthy adults were given Siberian Ginseng and the results were astonishing, participants were better able to handle stressful conditions, increase physical prowess under duress and mental acuity increased. Siberian Ginseng was so effective in increasing endurance and performance of athletes that many famous Soviet Olympic athletes and champions included it in their training regimen. After the Chernobyl incident, Siberian Ginseng was given to people exposed to radiation. A 1992 Russian study showed that Siberian Ginseng reduced the growth of tumors in rats exposed to radiation. 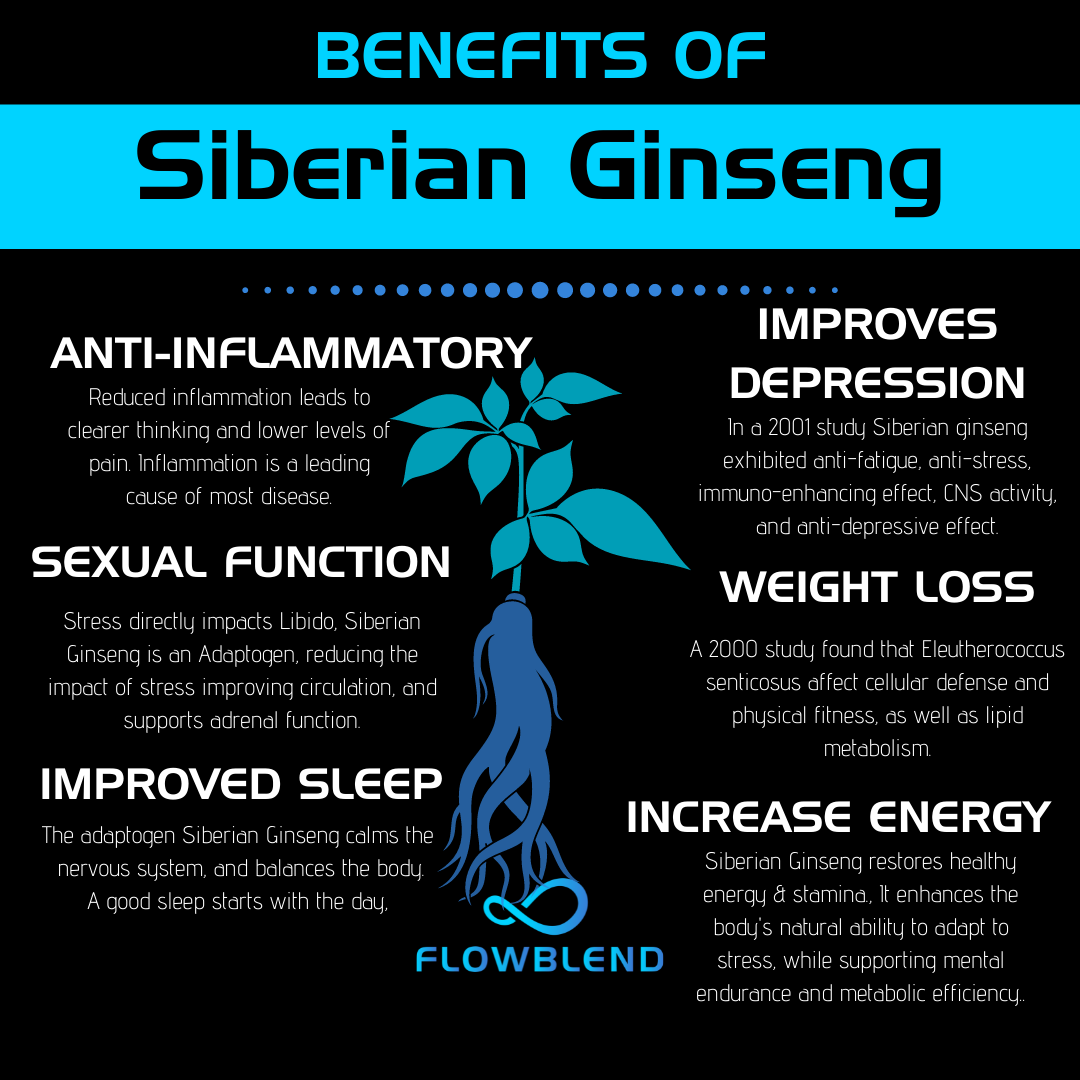 In Ayurveda, the Siberian Ginseng herb is recognized for its ability to increase concentration and is classed as Medhya Rasayana, a Nootropic herb that improves cognitive function. One preliminary study found that middle aged volunteers who took Siberian Ginseng improved their memory compared to those who took a placebo. A very recent study in Japan found that oral administration of Eleutherococcus senticuosus for 17 days significantly enhanced object recognition memory.

Eleuthero Root has been found to be a vascular relaxant which means it can increase or normalize blood flow. Which is great for nutrient delivery within the body, delivering oxygen to muscles, and treating ED (erectile dysfunction.)

A 1986 study in Japan showed eleuthero ginseng improved oxygen uptake in exercising muscle. This means our body has the ability to perform longer under strenuous activity like weightlifting.

Eleuthero root has a stimulating effect on the body’s metabolism altering mobilization and utilization of carbohydrates and fatty acids. Although it has not been conclusively determined, we could probably assume that all these improvements in our body function would lead to weight loss.

Siberian Ginseng bolsters adrenal function, improves blood flow and oxygen, enhances the Metabolism, increases endurance and decreases inflammation. Theoretically this all leads to an increase in energy, which is why Chinese medicine has used the plant for thousands of years to support Qi.

Chronic Fatigue was ‘substantially reduced’ among 76 participants in a randomized 2004 study. Chronic Fatigue associated with Fibromyalgia also seems to be improved with Siberian Ginseng.

Eleuthero is an adaptogen as it helps the body in relieving stress by controlling the bodies adrenal system. Studies show that stress directly effects libido, someone suffering from stress or anxiety are far more likely to suffer low libido.

Inflammation is one of the leading causes of disease in the human body. Inflammation can cause brain fog, joint pain, lethargy, muscle pain, stiffness, and fatigue. Traditionally, Siberian Ginseng was used to reduce inflammation. Compounds contained within Eleutherococcus senticuosus have been found to be anti-inflammatory.

In women, Siberian Ginseng has been shown to normalize menstruation and tones the uterus.

Eleuthero Root can help our bodies in so many different ways, it’s easy to see how it has been classified as an adaptogen. Overall, if you are seeking to improve your overall health, well-being, and energy than Siberian Ginseng is worth exploring.

Recommended dosages vary between 100-300 mg per day. Data shows that Eleuthero Root needs to be taken over time to get the benefits. It appears that within 1-2 weeks benefits will be felt. Siberian Ginseng appears to be safe to take over extended periods of time. Although its recommended to take a ‘tolerance break’ every 2-3 months.

Extreme doses of 800-900 mg have been shown to cause adverse side effects like headache, nervousness, and stomach upset.

Where to get Siberian Ginseng?

*These statements and product have not been evaluated by the FDA. This Product not intended to diagnose, treat, cure, or prevent any disease.