Are you looking to elevate your cognitive function, increase memory and learning ability? Look no further than Alpha GPC. Studies of Alpha GPC suggest that it is effective in supporting Memory, Learning, Focus, Strength and Explosive Power. Although there are many options for Nootropics and strength, Alpha GPC is among the best. 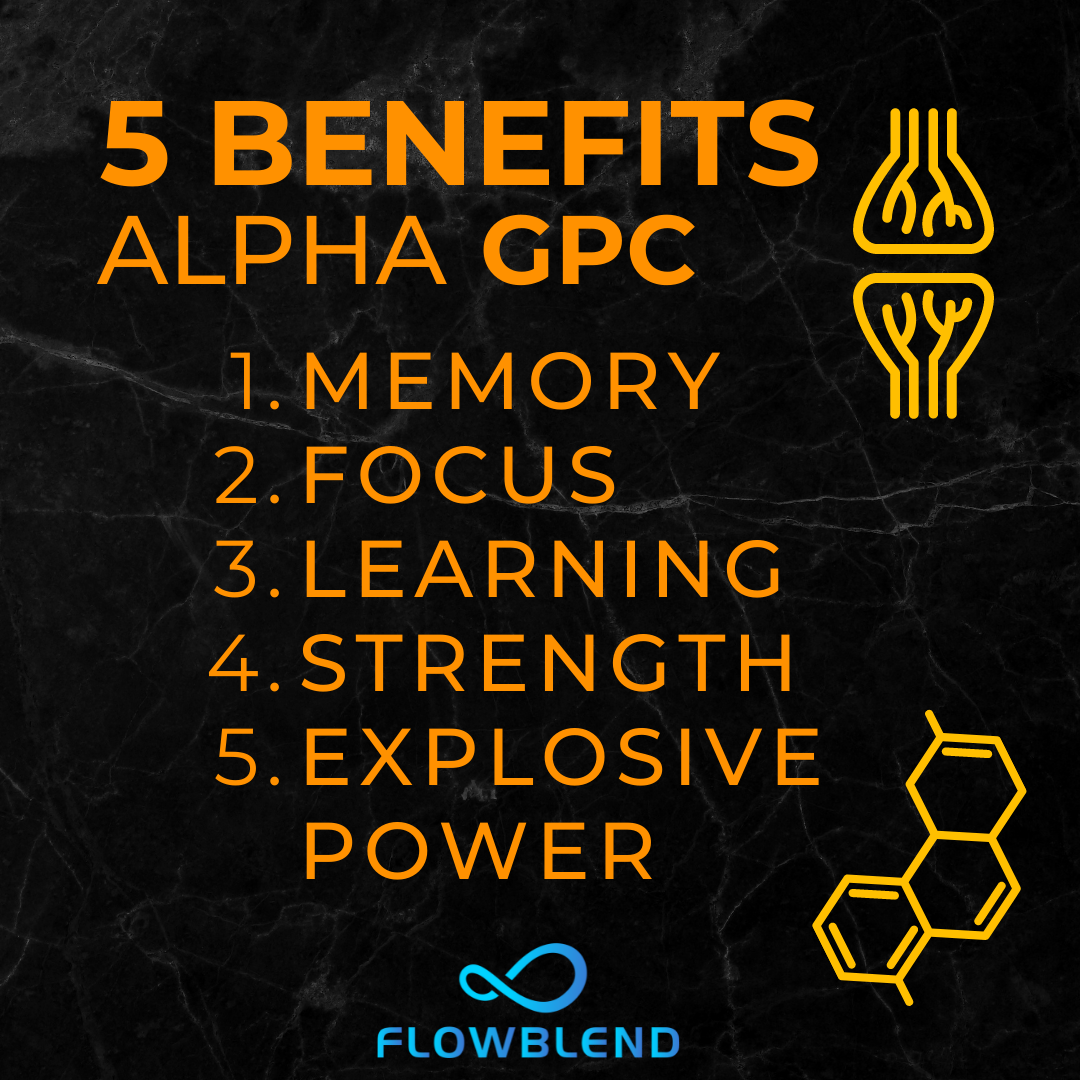 What is Alpha GPC?

Alpha-GPC, otherwise known as L-Alpha glycerylphosphorylcholine or choline alphoscerate, is naturally present inside the body, but is commercially available as a fatty acid derived from soy lecithin. Alpha GPC is sold in the United States as a supplement for its primary effects on cognitive function and brain health, and secondary function of muscle gains and recovery. Alpha-GPC is a Choline-containing supplement that is a precursor to Acetylcholine.

Alpha GPC is typically about 40% Choline by weight. Choline is a macro-nutrient that is wildly important for the process of methylation. Methylation is a biochemical process that is essential to keep the gears of energy production and detoxification alive in your body. Methylation is worthy of a book, but for simplicity lets cover the highlights.

The Methylation cycle is responsible for:

Choline is important for Methylation, and many other processes, but it is essential for brain function. Simply, Choline supports energy, brain function and the metabolism. Our body is able to produce a small amount of Choline on its own, but we get most of it from food sources like eggs, beef liver, and salmon.

Alpha GPC easily crosses the blood brain barrier delivering Choline to where it can be utilized right away. Choline is also a precursor to Acetylcholine.

Alpha GPC is 40% Choline, and Choline is a precursor to a vital neurotransmitter called Acetylcholine. Acetylcholine is fundamental for focus, memory formation and learning. It also is needed for muscle contractions and sleep. Acetylcholine cannot pass through lipid membranes, meaning it can’t pass the blood brain barrier, but Alpha GPC easily crosses, raising Choline levels, which elevate Acetylcholine.

Acetylcholine and the Central Nervous System

Because we are focused on the Nootropic effects of Alpha GPC, one thing worth mentioning is that Acetylcholine has involvement with the Central Nervous System (CNS). It’s biggest impact on the CNS is it’s involved with Memory, Motivation, Arousal and Attention. [2] When we mention arousal, this is not just about physical attraction, it’s important for the process of turning thought into action.

Alpha GPC is considered one of the best Nootropic supplements to enhance cognitive performance. Cognitive decline often correlates with the struggle to concentrate and brain fog. In a double blind placebo controlled study[3], 261 patients with Alzheimer’s disease ranging from mild to moderate were given Alpha GPC. The group given Alpha-GPC, 400mg capsules 3 times a day, showed consistent and steady improvement across many cognitive tests while the placebo group exhibited no change or a steady rate of decline.

In a review with thousands of participants suffering from cognitive decline like dementia, Alzheimer’s, stroke and age-related decline, Alpha GPC significantly improved the patients’ clinical condition. [4] This review saw especially favorable results for memory and attention. Could we theorize that this is due to the increased Acetylcholine? Alzheimer’s has shown a correlation of low Acetylcholine levels in the brain[5], Alpha GPC stimulates the production of Acetylcholine, which plays a role in attention, memory, and learning[6].

After a stroke or TIA it’s common to suffer cognitive issues with memory and attention. In Europe Alpha-GPC is sold as Gliatilin. [7] Studies have shown Alpha GPC plays a very therapeutic role in cognitive recovery for patients after an acute Stroke or TIA. [8]

The majority of clinical trials that we have to look at are focused on age related cognitive decline, but there is a placebo-controlled study[9] that we found where 32 young healthy volunteers were given doses of Alpha GPC for 10 days and then subjected to ‘scopolamine,’ an amnesia inducing drug. The results showed that Alpha GPC helped restore memory and attention, and counteracted the drug induced amnesia.

From all this we could summarize that there is ample evidence that Alpha GPC has the potential to be a very effective tool to stimulate cognitive function. Researching Alpha GPC on forums like Reddit shows plenty of anecdotal evidence that people are experiencing profound cognitive boosts by supplementing with Alpha GPC and using it in different Nootropic stacks. 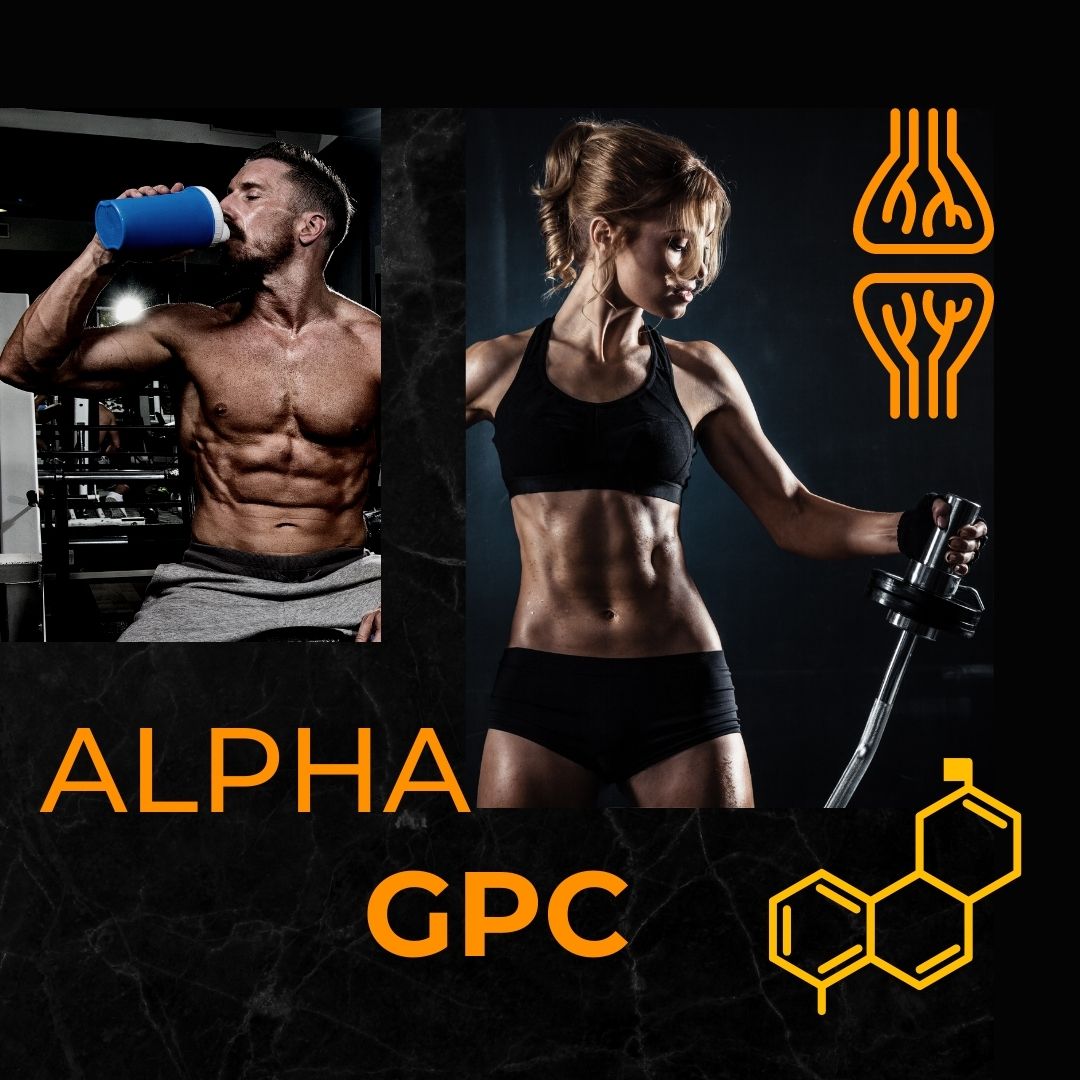 So how does Alpha GPC play a role in increasing physical power? We can only theorize at this point, but there is evidence that it can be a powerful ergogenic aid. Ergogenic is a term used for a method, legal or not, to increase athletic performance.

We know that Alpha GPC increases Acetylcholine, and Acetylcholine is a neurotransmitter, meaning it helps send messages between neurons signaling the contraction of muscles and other functions.

In several small-scale studies, supplementation of Alpha GPC showed a pretty shocking trend that deserves more research. A study [10] with seven men showed an increase in Bench Press strength of 14% when supplementing with 600mg of Alpha GPC 90 minutes before workout.

A placebo-controlled study with thirteen college age males given 600 mg of Alpha GPC per day resulted in significantly greater strength especially in the lower body after 6 days of supplementation. [11]

In a study[12] with 20 young adults given different dosages of Alpha GPC compared to Caffeine and a placebo, they found that the participants given Alpha GPC had a higher vertical jump power, without the jitters that come in the aftermath of Caffeine intake. The researchers also noted that the study showed benefits for mental tasks as well.

Forty-eight college aged males were given differing doses of Alpha GPC 250mg vs 500 mg, and tested on different types of strength training and explosive movements. They noted differences in the group Alpha GPC groups, noting the greatest benefits in the 250mg group.

Many of the benefits that come from resistance exercise like weight loss and lean muscle mass are thought to be the result of increased Human Growth Hormone, HGH. In a small study with 7 male volunteers peak HGH levels rose to 44 times greater levels than the control group after 600mg of Alpha GPC 90 minutes prior to workout.

Although synthetic HGH is considered illegal, natural HGH is vital to cell regeneration, and maintaining healthy cell tissue. Men who supplement with HGH experience an increase in strength, decrease in fat, tightening of skin, healthy hair growth and increased libido. A 2004 study [13] found that after 6 months of HGH supplementation in adults, there was a significant increase in feelings of well-being, mood and quality of life.

Overall, these small-scale studies provide evidence that Alpha GPC has the potential to be a powerful aide for anyone looking to increase strength or speed, but more in depth study is needed. Professional athletes and coaches are looking to add Alpha GPC to their supplement regimens because of the evidence that exists already.

Between 300 and 1200 mg per day seems to be the optimal dosing depending on the desired outcome. In the study for HGH and strength, the dose was 600 mg 90 minutes before the workout. For the study showing improvement in cognitive decline, the dose was 400mg 3 times per day.

As with any new supplement, it’s always advisable to start out with a small dose and work your way up. Although side effects are extremely rare, it’s important to note that too much Acetylcholine can pose a risk. As an example, when a Black Widow spider bites you, it’s venom causes an acute rise in Acetylcholine leading to muscle spasms.

Alpha GPC is generally recognized as safe [14] and is well tolerated in adults. Side effects [15] , although very rare, can include fatigue, nausea, headaches, upset stomach, diarrhea, heartburn and nervousness.